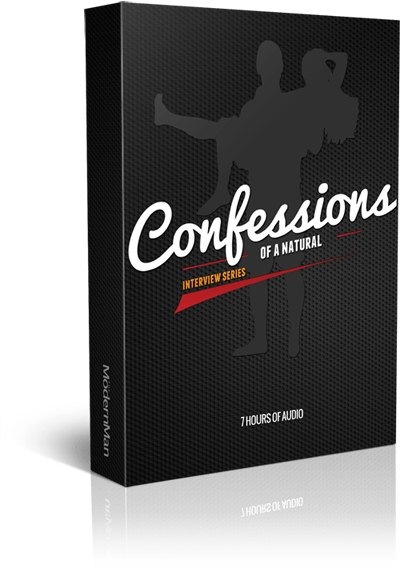 Confessions of a Natural

4 interviews with men who are naturally good with women. Their secrets for easy success with women are finally revealed.

Guys who are naturally good with women (Naturals) usually don't share their techniques with us 'regular guys'. This leaves regular guys at a constant disadvantage, because the Naturals know of secret dating techniques and strategies that make women fall in love with them and want to have sex with them like nothing else can. For them, it's just natural.

Dan, Ben and Stu have recorded 4 'top secret' interviews with Naturals, getting them to share the techniques that have been kept secret from other guys all this time.Finally, guys like us can learn the techniques that allow the Naturals to enjoy such easy success with women!

Dan, Ben and Stu ask the Natural a series of hard-hitting questions, getting him to reveal all of his very best techniques for approaching, talking to, dating, getting to sex and getting into relationships with beautiful women. As the Natural reveals his answers, Dan, Ben and Stu ask further questions to really get to the core of the techniques and strategies being used.

From this, you get practical, ready-to-use advice that you can use to enjoy the same, easy success with women that Naturals have been experiencing all this time.


What you will learn

Here are just some of the juicy secrets you'll discover when you listen to the Confessions of a Natural interviews:

Mark is the opposite of tall, dark and handsome. He is short, average-looking and thin (165cm/5″4, 51kg /112 pounds), but is better with women than anyone else we know. Mark uses a natural, friendly charm to win women over and explains how to be the man that women naturally feel lust and affection for, while still being a nice guy.

If you're interested in very beautiful women, you simply cannot miss out on hearing Mark's dating secrets. His current girlfriend is probably the hottest woman he's ever been with…and she's hoping to marry him.

Ash is the perfect example of a truly balanced alpha male. He is 'tough', but not aggressive. He is friendly, but assertive. Women find his approach charming, dazzling and rare and we always see him with beautiful women.

In his interview, he talks about many different dating situations with women - from turning a female friend into a girlfriend, getting a girlfriend in a work environment all the way up to having sex on the first night you meet a woman.

In this ground-breaking interview, you'll discover how to get women laughing and wanting more of you. You'll also hear Ash share some of the best 'one liners' to use when interacting with women. Plus, you'll also learn the secret to being the guy that ALL women are desperately looking for.

Rick is the ideal example of a 'cool guy' who everyone likes and wants to have as their friend. Yet, he wasn't always that way. Born and raised in Australia, he moved to the USA as a 20 year-old to live and work there for 7 years (he's now back in Australia and is 31 years old).

Alone and without any friends in America, he was forced into making a decision about his social life: Transform into a cool, popular guy who women love and who others want to have as a friend, or continue being a 'lonely loser'.

As you listen to his interview, you'll learn the remarkable techniques and methods he used (while in the USA) to fill his with beautiful women and lots of cool, interesting and loyal friends. He also used the same techniques and got the SAME amazing results while traveling across Northern Europe and when he came back to Australia 7 years later.

Among many other incredible stories from his experiences with women, you'll get to hear the approach he used to sleep with 9 women in 9 days while on a 2-week holiday across California, Florida and Las Vegas in the USA. You'll also learn the techniques he uses to attract loads of hot women to the many 'house parties' he holds.

It's worth noting that Rick's interview is not all about sex, partying and making loads of new friends. Rick also gets to the core of what it means to be a Natural and how you can live your life as a confident, charming guy who women desperately want to be in a long-term, committed relationship with.

His techniques will bring out the Natural in you and allow you to attract women and great friends into your life in abundance.

Andrew stands out from all the other guys competing for a woman's attention for one main reason. It's not his looks (he's average-looking like 95% of guys are in this world), it's not his money (he works a regular job like most guys) and it's not because he has some sort of high-social status (e.g. sportsman, celebrity) over others (he's just an ordinary guy).

The ONE reason that Andrew stands out is that he knows how to talk to women…and when he talks – he is FUNNY!! He knows how to make anyone laugh and have a good time while talking to him.

Women are always saying, "I want a guy who can make me laugh" because guys like that bring fun, excitement and desirable emotions into a relationship. If your personality is boring to women, they won't feel as much attraction to you as a person – it's as simple as that.

Just by listening to Andrew's interview, you will quickly learn how to make ANYTHING that you say sound funny and interesting to women. You'll also hear how to be confident, alpha and charming in a way that most guys will never know.

It won't take hours of talking, or weeks of expensive dates to get a woman to fall for you: She'll start falling for you during the first few minutes. It will then be your choice whether you start a committed relationship or a fun, sexual relationship with her. She will want you either way.

Here's more of what you'll learning these amazing interviews!

What is Confessions of a Natural about?

Confessions of a Natural is about getting 'Naturals' (guys who are naturally good with women) to reveal their rarely-known dating techniques and strategies. Until now, these have been kept secret from 'regular guys' so the Naturals could enjoy easy success with women, while other guys struggled.


Who should buy this program?

You should buy Confessions of a Natural if you want to:


Who shouldn't buy this program?


How is Confessions of a Natural different to other Modern Man products?

Confessions of a Natural mainly focuses on revealing how guys who are naturally good with women (Naturals) go about approaching, attracting, dating and enjoying relationships with women. Other Modern Man products focus on different areas. For example: Mastery Methods & Mindsets is mainly about confidence and taking your success with women to the highest level possible.

Here is a quick summary of the different focuses of each Modern Man product:


What are the unique benefits of Confessions of a Natural?


What is the story behind Confessions of a Natural?

Over the last 5 years, we've had the opportunity to meet and become friends with many guys who are naturally good with women.

Other guys look on at Naturals and wonder how on Earth they manage to enjoy such easy success with women, even though the Naturals are really just average-looking guys with nothing special to offer to women. What other guys don't realize is that the Naturals are using a collection of secret techniques that most guys are unware of.

We've decided to put an end to the secrecy of Naturals and have chosen the 4 best Naturals we know. Mark, Ash, Andrew and Rick are true masters when it comes to women, dating and relationships. Their advice will give you a massive edge over other guys. Best of all, no-one will know because the techniques are invisible to people who are unaware of them!

"She hasn't stopped calling me since..."

"These interviews taught me that my current self is valuable to women and that boosted my confidence greatly. I approached a woman 3 weeks back at a local bar near me and had her home with me in under 2 hours...I couldn't believe it!

I must say, sex isn't the only thing I'm after though...I'm now dating a woman I met through a mutual friend and we're taking it a bit slower...thanks to what I learned from these interviews she woman was attracted to me the moment she met me and she hasn't stopped calling me since!

Thanks for getting the naturals to reveal their secrets, now I know that I have the ultimate advantage over other guys. This stuff works like magic – thanks a lot!" Danny, Chicago

"I finally did it! There's a girl I've known for the last 2 years through friends and she's only ever treated me like a friend. All that changed last night because she slept at my house! Haha...I finally did it. I really like this girl and she said to me that she's liked me all along and was waiting for me to do something. The stuff that you guys teach is the best advice on the internet for sure. The changes I made and the things you suggested to say to her made all the difference. I'm just so happy about this I could keep writing about it for hours! All the best to you guys – keep on doing what you're doing" Ryan K, Melbourne, Australia


"I can actually be a nice guy and still pick up women..."

"Wicked fun listening to this stuff! You guys are funny as hell. I now understand how I can be a nice guy and still pick up women like anyone else...it was awesome to hear that the naturals are actually just nice, regular guys. I'll be using these new techniques on Friday at a party I'm going to – should be a blast!" Anthony P, Phoenix

"Just thought I'd let you guy know that I used the advice 2 weeks ago on a couple of women I speak to regularly through work...now I'm dating one of them and she really likes me. I didn't realize it would work as well as it did!" E, Canada